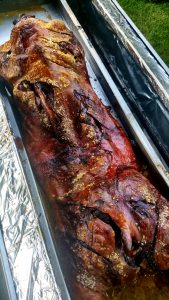 We were catering up North on Friday for a young lad called Ewan with a hog roast Grimsargh. He was travelling to Birmingham the following day as he was in a boxing competition. A huge achievement to get this far considering he has only been boxing for a year! His family and friends had organised the get together to wish him luck and we were asked to cater for 100 with our hog roast Grimsargh. We arrived a few hours before at the Boxing Club and set up our machine and placed a huge pig on the machine.

We set up our prep table and made some salads to accompany the meat and some applesauce. As our staff started to unload the mountain of freshly baked bread buns from the van the guests started to arrive and you could smell the hog roast Grimsargh cooking all around the club! The meat virtually cooks itself! Our machines are world class and cook everything to utter perfection. Everything was ready as the guest of honour arrived to a round of applause by all! He said he had starved himself all week so he could enjoy the food as he didn’t want to risk going over for the weigh in. We first removed the cracking and cut it into slices and handed it out to guests everyone was intrigued as our chef stood their sharpening his knives and carving the pig he makes it look so easy. But to be fair it is! The meat is so tender and succulent and retains its flavour a lot of people associate pork as being dry but that never happens when we cook it.

Everyone had more than enough to eat and Ewan said he would be burning off the extra calories in the gym later that night. After everyone finished eating we stayed back and chatted to the coach who said he had very high hopes for Ewan and said he would most definitely “Smash it!” tomorrow. As we packed the van and got ready to head home we wished Ewan well and asked him to let us know the outcome we told him we would all be routing for him tomorrow!