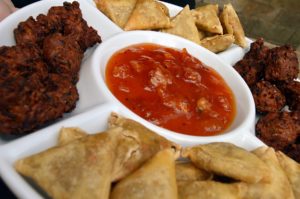 The couple chose one of the Hog Roast Blackpool team’s more luxurious menu which offered a huge variety of different cuisines. The team’s waiters served handmade canapes to the guests which included miniature margarita pizzas, miniature quiche, Dim sum, chicken satay and an Indian selection. Following the canapes, the Hog Roast Blackpool team served several main dishes on the buffet table including whole roasted turkey served with fresh cranberries and sage and onion stuffing or slow roasted pig served with apple sauce, crackling and homemade stuffing. In addition, bread rolls and wraps were served alongside the meat and as well as a vegetarian option of lightly grilled vegetable and haloumi skewers served with a tzatziki dip and pitta breads. To complement the meats, seasonal vegetable were served which were cooked fresh on site with the meats.

Finally, to end the evening, the guests were offered a pudding menu and could choose between profiteroles, served with chocolate sauce, and handmade chocolate tortes, both of which were served with fresh cream. This menu also provides waiting staff to serve the food to the tables which was prepared fresh on site using the Hog Roast Blackpool team’s Hogmaster machines. The team also arrived several hours before the desired serve time to ensure that everything was ready in time. Amy and Danny really enjoyed their wedding anniversary and were glad they chose the Hog Roast Blackpool team to help them create a fantastic party. They were also really pleased that their guests had a great time and they all appeared to really enjoy the food provided. The couple thanked the team’s staff and expressed how the team would be a pleasure to hire again at their next party. The team’s head chef was also really proud of the service his fantastic team delivered.